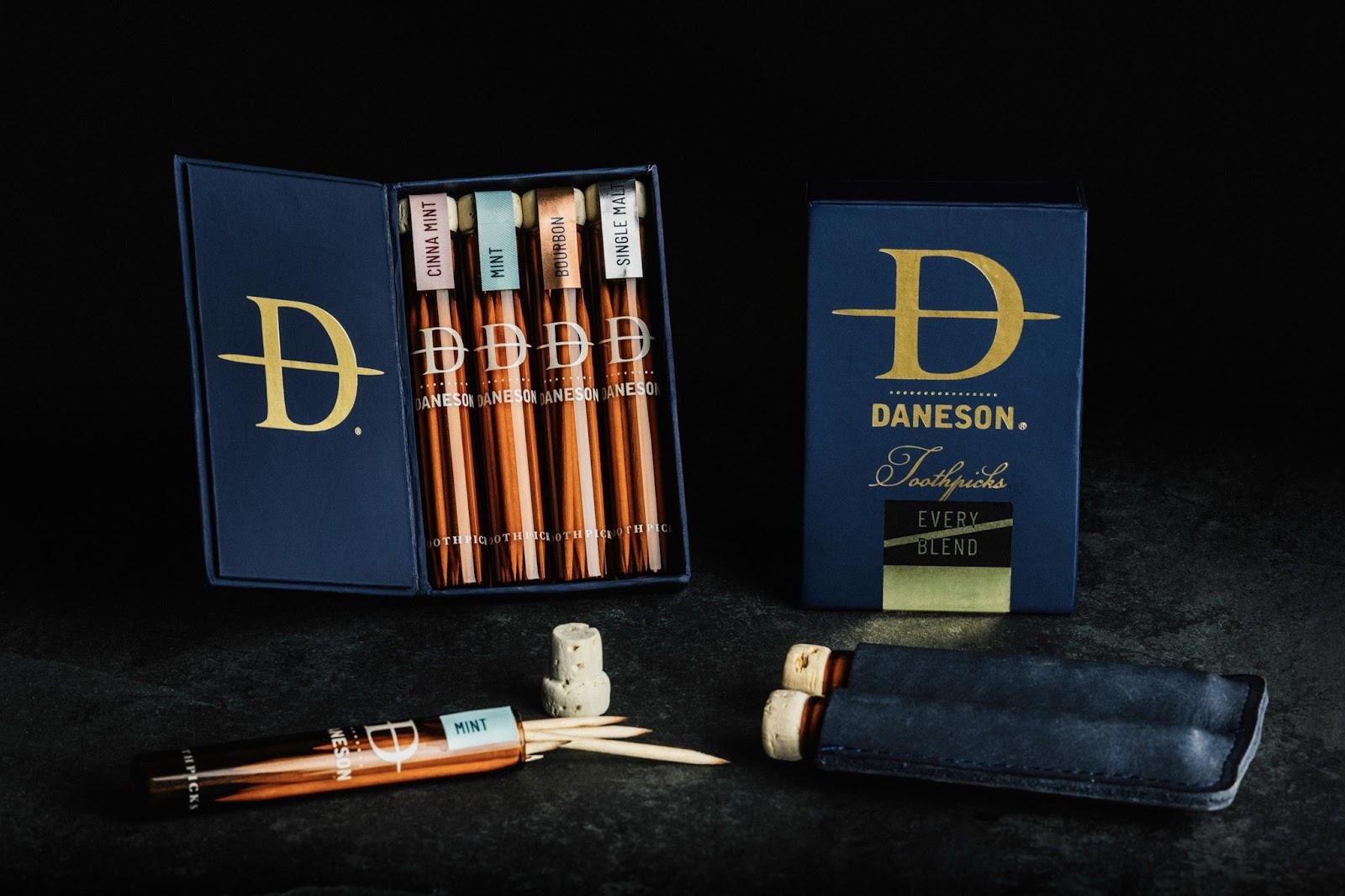 In our brand spotlight, we feature Abound brands who are ready for retail. This week we sat down with Peter Smith, the founder of Daneson. Daneson sells high quality toothpicks, is based in Toronto, and has been in business for nine years. Shop toothpicks here.

Peter: I wanted to make a physical thing that was a brand and the thing needed to be primal. It needed to be crazy and, at first glance, an extremely stupid thing to do.

The toothpicks fit the bill.

Abound: How did you make your first prototype? What changes have you made to your product since then?

Peter: The first prototypes were made with purloined toothpicks from my local pub and flavors from the grocery store. These were deeply unsatisfactory.

It turns out that flavoring wood wasn’t really a ‘thing’ for good reason. It’s extremely hard to do.

Since then, we’ve invested heavily in the science and tech of how to flavor wood and we continue to refine and work on it today. In fact, I’m expecting the delivery of some new flavoring equipment to play with this afternoon.

Abound: How do you make your product? Yourself? A manufacturer? What’s your process like?

Peter: That’s the secret sauce. All I can say is we use real, extremely expensive ingredients, and it’s taken years to figure out.

Abound: What’s your day to day like? Do you have any favorite and least favorite parts?

Peter: Favorite – stoking the fireplace at the office. Least favorite – frequently noticing my fly has been undone for an unreasonable length of time.

Abound: What was your initial investment? How did you get the money?

One, was giving up my career in finance and flat in Nottinghill to move into my parent’s basement and borrow my Mum’s station wagon. I lived down there for… seven, SEVEN years. It was great. I love my Mum and Dad.

I also didn’t pay myself for about eight years and, I think, I’m still the lowest paid person in the company.

Two, I sunk my entire savings into Daneson.

Three, there’s no other way of saying this – we bootstrapped the shit out of Daneson.

For years we had a cash flow report that showed AR/AP in terms of hours i.e. if I get money by hour X I can afford to payroll at hour Y, it was stressful. On top of this, I had to borrow money from my family a couple of times when things were tough.

The one thing anyone who’s thinking of starting a toothpick company should know is – it took more money than you could ever imagine. There’s a good reason there aren’t many companies like mine around.

Abound: Where was the first place you started selling your product?

Peter: Colette. A concept retail store in Paris. It’s closed now but it was a big deal. It’s worth reading the NYT article on the place. I’m no expert, but from what I’m told landing Colette was akin to winning the lottery – it turned out one of the biggest tastemakers in the world dug toothpicks. They stocked us right up until they closed. They were also very lovely people.

Abound: Where do you sell your product now?

Abound: Where would you love to sell your products in the future?

Peter: To anyone who has the same values and who ‘gets it.’

Peter: At the moment, Cinna Mint. A while back we made a Smoked flavor that was tasty.

Abound: What’s your marketing like? Is social media an important part of Daneson? If so, how?

Peter: In days past, we spent so much time keeping the wheels on the cart that marketing was a bit of an afterthought. We relied heavily on word of mouth and letting our brand and product speak for itself. That said, one thing we have is a full in-house studio that enables us to shoot what we want, when we want, to the quality we want. We found consistency with agencies problematic.

Before the pandemic, we did very little social media work. Now that there’s a pandemic on, we’re doing a lot on Facebook. It’s a bit of a balancing act because we’re a premium brand, and premium and Facebook are not what you’d call natural bedfellows.

For instance, we don’t do the discounts or offers you see other brands doing, but for the time being, we’ve figured out how to leverage social media advertising to our advantage. On top of finding ways to use Facebook ads to help pay the bills, it allows us to hear from a lot of our customers through the comments. We’ve learned a lot from what our customers have to say, which ultimately helps to make the whole brand experience stronger.

Abound: What are some of the most frustrating challenges and/or moments you’ve had with Daneson?

Peter: In no particular order:

– Blowing up my parent’s kitchen.

– Setting my hair on fire.

– Nearly amputating a finger, trying to fix the exploded oven.

– Getting delivery of a hundred thousand of something the wrong size.

– The fact that if you spill toothpicks, all you can do is get on your hands and knees and pick them up one by one.

By far, the most significant challenge and the one I most seriously underestimated was this – making something small is complicated.

A small product means you have even smaller physical tolerances. What this means is, if something like our bottles is a half-millimeter the wrong size, the cork doesn’t fit. Not only does the cork not fit, but the toothpicks don’t fit either. Our success is a function of 0.25-0.5mm mistakes. It’s relentless.

Peter: Giving my mom shares in a company that’s actually worth something. And I don’t think it’s a victory or an achievement of my making, but I really admire my team. They’re great people. Also, our customers. Our retailers and the people who buy from us online are lovely people.

Abound: What advice do you have for people who want to sell a product?

Peter: Swimming is not a sport. It is something you do to stop from drowning.

Peter: Begrudgingly, all of Daneson’s problems at the end of the day are my problems. There’s a certain freedom in owning this and savoring the fixes.