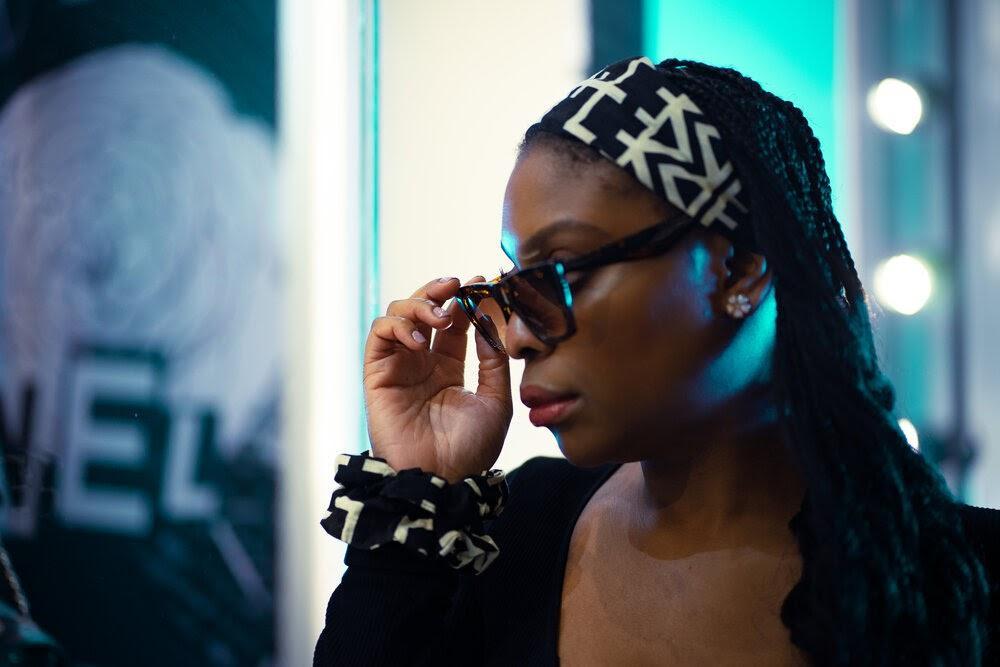 In our brand spotlight, we feature Abound brands who are ready for retail. This week we sat down with Kelechi Uchendu, CEO of Kay Kay’s Fashion. Kay Kay’s Fashion sells headbands and scrunchies, is based in the Metro-Detroit area, and has been in business since 2017. Shop hair products here.

This event was special because it was an event to honor me for my accomplishments. I remember walking down the grand staircase in a gorgeous dress that I had never seen before–and I knew that I needed to bring this dress (and my dreams!) to life.

When I woke up, I told my mother about the dream I had and my desire to design the dress. My amazing mother told me that I should start right away and not put my dreams on hold. After this conversation, I was determined to design the dress. Since I am not a seamstress, I ended up working with a company in the Metro-Detroit area to help me sew my dress. Designing my dress was not easy. It took a couple of fittings to make this unique dress perfect and I did not finish with the dress until March 2017, even though I started the design process in October 2016. However, I used the extra time to learn more about how to run a business.

When I finally launched in March 2017, I received a lot of positive feedback. Today, I sell headbands and scrunchies on my website and since I was accepted into the Market at Macy’s program in 2019, I was able to sell my products at the Market at Macy’s in Lenox Square Mall in Atlanta. I even had an event there in October 2019 where I was able to tell my story in front of several people.

What sets my business apart from others is my story. I do not have the typical background that most fashion designers have and I think that this has really helped my business stand out. I also love how my audience is able to see my journey and they feel as though they really know me. I am very authentic and in everything I do, I remind people that nothing is impossible and they should always chase their dreams. Inspiring people though fashion is why I do this business and not another one.

Abound: What are some of the most frustrating challenges and/or moments you’ve had with your business?

Kelechi: Initially, it was very hard for me to get Kay Kay’s Fashion featured in a magazine. I remember when I first started in 2017, an editor of a small publication told me to send her items to feature in the magazine. The lady ended up not featuring me and never returned the products or any of my emails. This was discouraging.

However, at the end of 2017, I ended up being featured in British Vogue and then after this feature, I have been featured in so many places. I have also worked at restaurants as a server (sometimes two restaurants in one day) to fund my business.

Finally, I had to make sure my products were retail ready for Macy’s and it was initially a struggle to find the right manufacturing company. However, once I found LA Fashion Source, it was smooth sailing and my products looked perfect and had the most adorable hangtags, etc. In summary, every “setback” has been a setup by God to move me to the next level!

Kelechi: I love my Veronica headband!

Kelechi: My proudest moment used to be when I was first featured in British Vogue. That feeling was one that I cannot even describe. However, God has blessed me even more since then and I would say that I was most proud on the day of my event in Macy’s in October 2019.

It was so surreal to be standing in front of my products that I worked so hard to create while standing in Macy’s (a store that I have always been obsessed with) while speaking to my family and a crowd of other people that I did not know. Just amazing.

Kelechi: Mind your own business (lol) and do not compare yourself to others.

Kelechi: I love inspiring others to go for their dreams and to start a business.