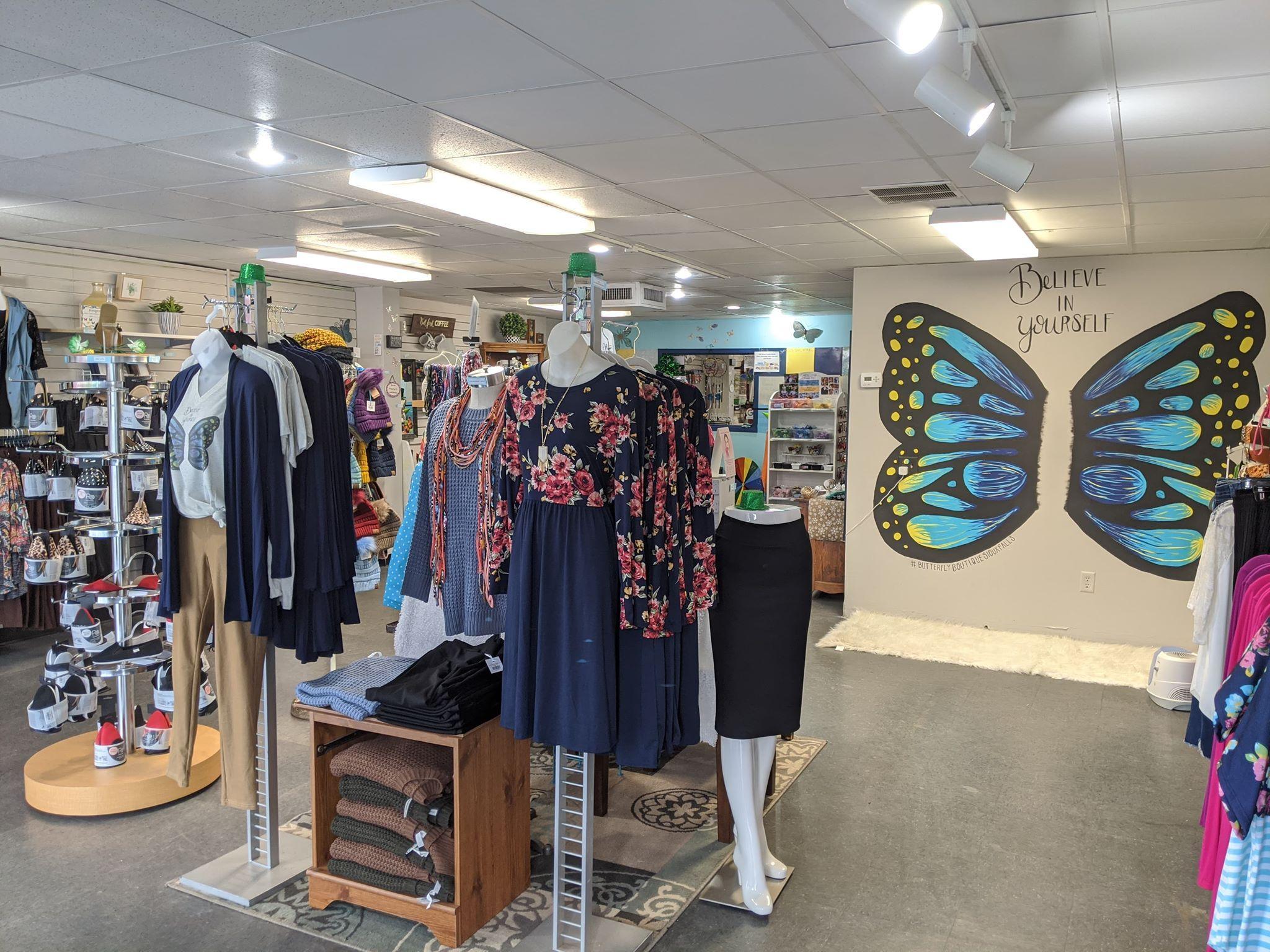 Carrie Thompson is the owner of Butterfly Boutique, which sells clothes and gift items, and is located in Sioux Falls, South Dakota. We sat down with Carrie to find out what her store owner journey has been like.

Abound: How long has Butterfly Boutique been open?

Carrie: I’ve been open for two years now, I opened February of 2018 and ran it out of my home for a little over 6 months. Then I moved into a small office space, and then January of 2019 I moved into my storefront. I was with LuLaRoe for a year and a half before that, so it was a jumping point from doing that.

Abound: That’s interesting. How did you decide to transition from selling online to opening your own boutique?

Carrie: Well, a lot of it was just me running off what I did with LuLaRoe. I kept operating like I had been, just with my own product, and I got to a point where I was in my house all the time and it felt like I never stopped working because it was always right there.

I started looking for a small office space and someone wanted out of their lease. It was in a good area with a good price and very centrally located, so I decided to try it. My current storefront is actually in the same building, so I didn’t move far.

Abound: Does LuLaRoe sell just on Facebook, or is it on the general internet as well?

Carrie: It’s mostly Facebook, home parties, things like that. I did a lot of vendor events when I switched over to the boutique because I needed to get the word out. I’d have parties and shopping days at my house.

Abound: It sounds like the transition to opening your own boutique was pretty natural.

Carrie: Yeah, it was. Opening my own boutique felt like the next step in what I had been doing already.

Abound: I feel like it would be scary to throw those events, I don’t know if I have enough friends to throw consistent events and have people continually show up.

Carrie: You know a lot of people say that, but if you put it out there, you’d be surprised. Even people that you just work with might want to come check out clothes and see what’s new.

Abound: So what made you interested in LuLaRoe in the first place?

Carrie: Honestly, it came out of a necessity for wanting money. And a necessity of needing to pay my student loans.

Carrie: I mean, that’s honestly where it started. I saw other girls literally selling out entire shipments left and right and making hundreds of thousands of dollars a month.

I saw it as a way for me to try and get my student loan debt paid down. I did really good for the first six months and then the highs just kind of tapered off. There were so many other consultants, and I knew it was time to do my own thing. I wanted to be able to offer more than just clothes and be able to give my customers a place where they could get anything they want from me.

Abound: So what was your first expansion move past LuLaRoe?

Carrie: I actually did a giant event, a big three day event with LuLaRoe, where I realized, ‘I think I’m done with LuLaRoe.’ I found myself telling every person I knew that stopped by that I thought I was done.

Afterwards, I was like, since I just told 20 people this, I think I need to be done. I put all my inventory out at wholesale prices, made $800, and said, ‘ok, I guess we’re doing this.’

I turned around and bought my first round of new stuff with that money, and that was that.

Abound: How did you decide where to buy new inventory?

Carrie: I had no idea when I was starting, so three to four months before I actually bought anything I started researching just by searching online.

I Googled wholesale clothing, and then found the LA Showroom. After a while I found more places, but I’ve also learned that people don’t like to give out information.

Abound: What does your store sell now?

Carrie: I have women’s clothing and accessories, as well as some home goods. I like to support local makers. I have a gal that makes coffee mugs and I have her stuff in my store. One of my good friends and customers has a line of jewelry that I stock. I like to carry anything that’s a little bit different than what everyone else is carrying.

Abound: So you started with the LA Showroom and built from there, what are all the different places you find your products now?

Carrie: It’s a lot of places, for one I expanded into physical markets. I went to Denver last year, didn’t love that one. There’s a tiny little market like twenty minutes from my house that’s great. I go to the one in Minneapolis. I heard about Abound through Bella Candles, they posted about it in one of the boutique groups.

Carrie: There was a good camaraderie, I mean it’s a direct selling company, but we had teammates and times where we would just swap clothes. I was in some groups that would meet up like once a month and trade different stuff just so we could refresh our inventory.

The one thing I miss about being on my own is not having that team that I can go to and bounce ideas off of. Now it’s more expensive to get advice and help.

Abound: Who have you found to help you and give you advice?

Carrie: Well, I have a marketing person who’s helping me set up my marketing plan. I also have a life and business coach, and I pay a photographer. There are free avenues out there, but I really need that individualized help.

Abound: Yeah, definitely. What have been some of your favorite things about opening your own boutique?

Carrie: I love when people let me help them, when people in the store are curious and ask questions. I really like helping people feel good and letting them get something cute without spending a ton of money.

I try to keep my costs down because I’ve struggled most of my life and I’m still struggling. I know what it’s like to want things and not be able to get them. I also like picking new things, shopping for new stuff is fun.

Abound: What would you tell someone who’s just getting started with opening their own boutique?

Carrie: I never had a plan starting out, and never had goals, but one thing I’ve learned is that having a cohesive inventory helps. Right now, you can wear so many different things from my store and they all go together, and that came from planning it out.

Abound: Now that you’ve had some time away from LuLaRoe, do you look back on it positively, negatively, or neutrally?

Carrie: You know, it gave me my start. I don’t really have anything negative about them. Of course sometimes we couldn’t get the stuff we wanted or whatever, but I do still love the clothes. I like their new styles and prints, but now I’m promoting my own clothes and not someone else’s. But yeah, I don’t have anything bad to say about them. I made some amazing friends.

Abound: It seems like it was a good launch pad for you and was one of the reasons you eventually opened your own boutique.

Carrie: Yeah. I know there are a lot of people that feel they got screwed over, but you have to know what you’re doing. Yes, you have to spend a lot of money to get in, but if you’re expecting to just post stuff and not do any work, that’s just not the way.

Abound: Have you noticed any trends about what your customers are buying?

Carrie: I’d say the green movement. I’m carrying a lot of green products, like reusable bags, stainless steel straws, wax food wraps. I’d say eco-friendly is a big trend I think will stay for a while.

Abound: That makes total sense. Well thanks so much for meeting with me!