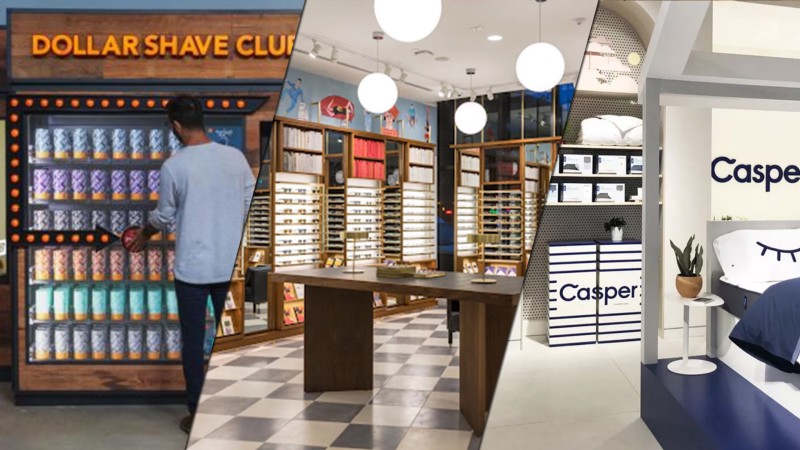 These companies started out completely digital and built their brands through social media. However, as these companies grew and established themselves, they decided to get their products in brick-and-mortar locations as well as continue their original DTC strategy.

Direct to consumer models are great, especially for businesses just starting out. But for many companies, once they have a great product with sales data, it makes sense to hire a sales rep and get it into physical locations as well.

Casper was launched in 2014 by Philip Kim. The mattress company removed the pain of going to a mattress store and awkwardly deciding which one you liked, and replaced it with the convenience of having a mattress sent to you in a relatively small box. In their first three years, they made more than $300 million in revenue.

However, even with an entire business plan centered around eliminating awkward retail experiences, they aren’t leaving brick-and-mortar behind. In fall of 2017 they opened up several pop-ups, by 2018 they had over two dozen permanent locations, and by 2021 they plan to have 200 brick-and-mortar stores.

Warby Parker may be the most famous example of a brand exploding because of a disruptive DTC model. Founded in 2010, the eyewear company provided a ‘home try on’ option where customers could try five different frame options.

However, they also got into retail quickly, opening their first retail location in 2013. In 2015 they partnered with Nordstrom, and by 2018 they had over 100 locations.

Dollar Shave Club was founded in 2011 but made waves with the success of their viral video in 2012. They offer membership services for razors and blades, and in 2015 expanded their line of products to include hair gel, cream, clay, and fiber.

In 2018 they opened over 10 vending machines in high volume areas like LaGuardia Airport and The Mall Of America.

Although we tend to think of Amazon as a behemoth so gigantic and powerful this fake drone video seems plausible, they started in 1994 as an online alternative to bookstores.

They entered traditional retail by opening three different types of stores. Amazon 4-Star, a shop in New York City that only sells items rated at 4 stars or above, Pop-Up stores in over 20 states which are essentially mall kiosks, and over a dozen Amazon Books stores.

Recently they’ve closed the kiosk program and will focus on expanding Amazon Books, Amazon 4-star, and a new venture: Amazon Go. Amazon Go is a cashierless convenience store, which uses cameras and technology to tell what customers have picked up.

Away is a travel brand that launched in 2015 with their sleek suitcases designed for younger travelers. They launched by releasing the book ‘The Places We Return To,’ a high-end coffee table book with interviews from interesting and traveled people.

Both founders met as executives at Warby Parker, and have followed a similar business model. They primarily sell online DTC but have opened locations in New York City, Los Angeles, San Francisco, Austin, and London.

Everlane is an online menswear brand that was founded in 2010. It focuses on sustainability, making its product in a Vietnamese factory that recycles both the water and the chemicals used while making jeans. They also focus on transparent pricing, allowing customers to see exactly where the money goes towards, and how much each step of the process costs.

In 2012, Everlane opened a pop-up shop in New York City, and in 2014 they partnered with Postmates to deliver their clothes the same day. They currently have two full-time retail stores open, both in New York City and San Francisco.

Bonobos is a men’s apparel company founded in 2007. They started by focusing on pants, but have since expanded to include suits, dress shirts, outerwear, and tailored suits.

In 2011, they opened a shop location that gave people a chance to try on the clothes and see a tailor before they bought anything. There are now over 60 ‘Guideshops.’ Bonobos has also partnered with Nordstrom and was recently purchased by Walmart.

Allbirds is a footwear company focused on sustainability that started in 2014 from Kickstarter, although the company wasn’t officially launched until 2016. The shoes are made from castor bean oil, superfine wool, and a foam derived from sugar cane.

In 2018, five limited editions of Allbirds were sold at popups inside Nordstrom’s in the US and Canada. Shake Shack also partnered with them in a one day release at Madison Square Garden. They currently have 5 full-time locations, in Boston, Chicago, San Francisco, New York City, and London.

Although technology has made it possible to have a huge customer reach and brand identity without any physical retail, clearly brick-and-mortar is still a good option for products. Now that this new DTC pathway exists, companies can decide when and if they want to enter the retail game.